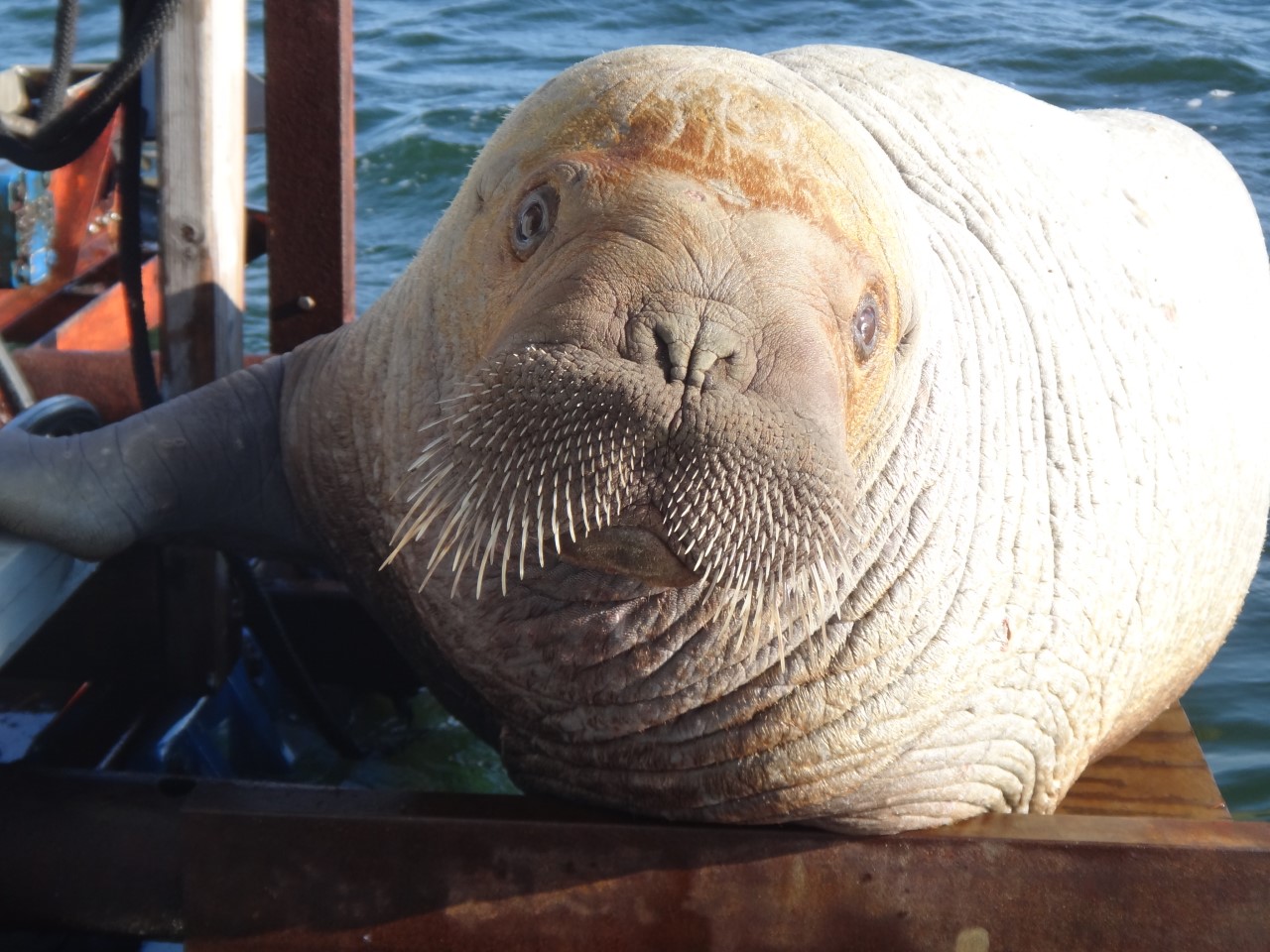 My friend, Don Degener, spent several seasons in Nome, Alaska dredging for gold, much like the Pomrenkes and Emily and others on the Bering Sea Gold TV series.  One day, July 22, 2012, he had just finished a dive and was climbing the ladder back onto his dredging barge, the Maverick.  The date sticks in his mind because it is the same day that his much beloved mother died at the age of 99.  As he mounted the steps he was feeling the pain of a mistake he had made a little earlier while still on the seabed sucking sand, rocks and hopefully gold into his 8 inch dredge.  A rock had managed to whack and pinch his thumb between it and the edge of the dredging hose mouth and broke the knuckle of it.  While feeling the pain and lamenting the impact it would have on the continuing work, he noticed a presence behind him.  Turning around to check whether it was a phantom or something other than the forces of the sea that he had felt, he discovered a juvenile walrus looking him in the face.  He quickly got aboard and hustled for his camera.  Meanwhile the walrus also climbed on board.  Passing the camera to his partner, fellow diver Joe Khachadourian, he jumped back in the water and approached the walrus warily hoping not to frighten his new friend off. 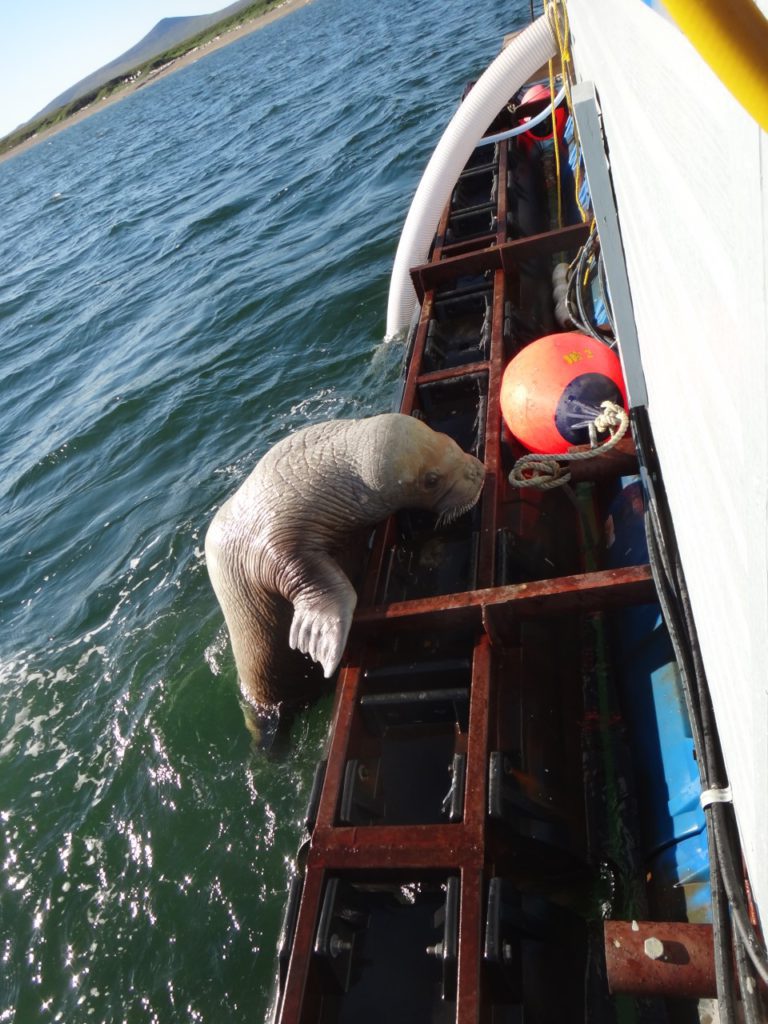 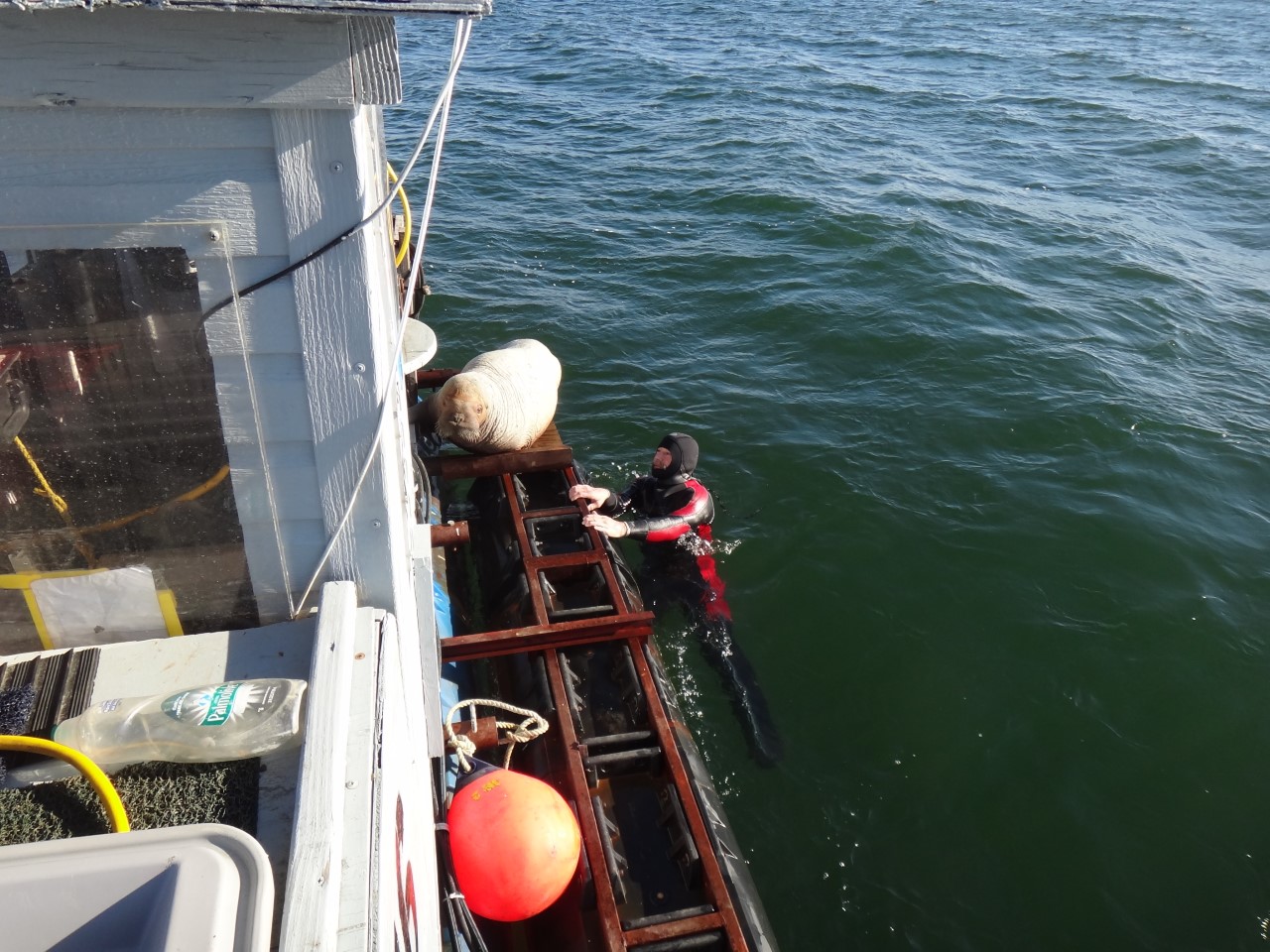 The walrus had no fear of Don whatsoever.  It stayed there in position as Don got closer.  The first thing that impressed him was that the fore flippers had five visible digits with cuticles that were remarkably more similar to those of a human than he had previously imagined.  As he petted the approximately 400 pound juvenile he was also amazed that there was thick nappy hair rather than a more blubbery sort of surface.

It was 9 pm and time to start the hour and a half of sailing to get back to the port in Nome.  Their day had started at 5:30 am and they really needed to get going.  Fortunately it is still light pretty much all day at that time of year, so operating in the dark wasn’t a worry, but getting back, unpacking and getting a bite to eat and some sleep before starting over again the next day was a concern.  They started up the motor and proceeded toward home.  This didn’t seem to motivate the walrus to disembark.  Prodding and simple pushing was also not enough.  It took Don bracing his back against the wall to the wheelhouse and feet on the side of the animal and pushing with all his strength to get it back into the sea from whence it came.   As they propelled away the “little” guy tried to stay with them and re-board until they reached a speed of 4-5 knots and the boat was able to pull away.  Research indicates that an average speed for a walrus is about 4-5 knots with maximum bursts of about 21 knots.  Perhaps a juvenile is not thus equipped or perhaps this lone walrus was weakened during its time away from its herd.  In any event, this was the last time this animal or any other walrus was seen during Don’s time there.

Walruses are known to feed primarily on mollusks, such as bi-valve clams, but also eat worms, gastropods, cephalopods, crustaceans, sea cucumbers, and other soft-bodied animals and even fish such as polar cod.  It would seem something appropriate was available to sustain it.  I would guess that by the size of it that it was mature enough to have some sort of capability to survive.  Hopefully it found its herd. 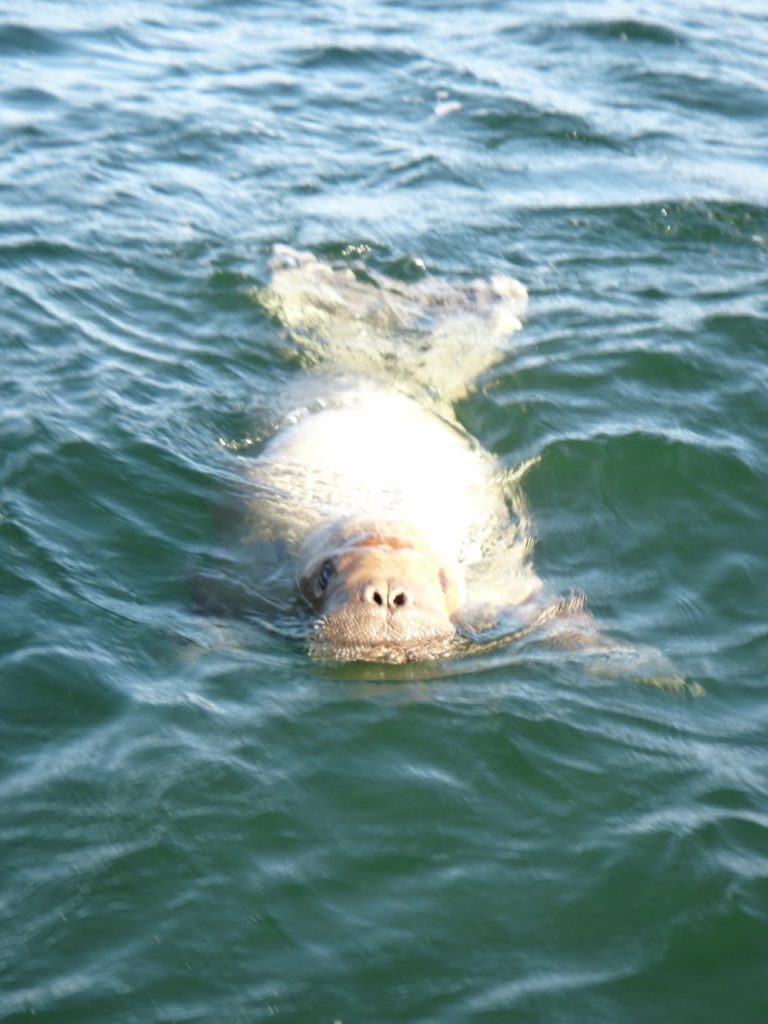 Back in town with everything stowed and secure for the night, Don ventured to an after hours hangout, the Polaris Hotel.  His boss, Bob Scott, and other miners including some of the guys from the Christine Rose from the TV program were there.  When Don told them the story of the walrus, none believed him until he showed the photos.  They all indicated this was a never before seen phenomenon.  A little later when buying a few things to take home from a small convenience store, Don related his story to the two native Alaskan proprietors there and was informed he was “full of shit, never would happen” and then produced the photos for them proving otherwise.

The Maverick is a 30 foot craft powered by a 50 hp Yamaha motor.  Its dredge uses an 8 inch hose that lifts materials from the bottom to a sluice box on deck that sorts out the heavier gold from other stones and finer substances. The company Don worked for at that time had two other units that were using 10 inch hose which could lift significantly more.  Divers use a full face mask and regulator system running from a hose to a low pressure compressor. 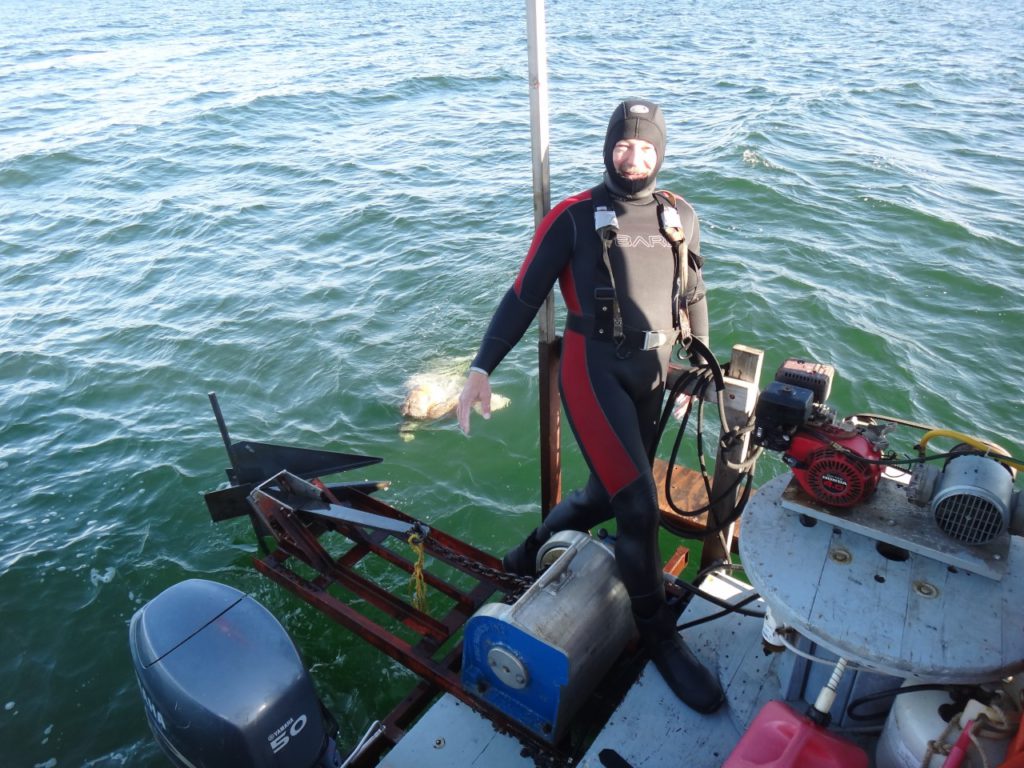 One diver submerges at a time and has an intercom to communicate with the surface.  When one diver is down, the other maintains the equipment and supports the diver below.  If you have watched the TV series “Bering Sea Gold” you will have noticed there seem to be a lot more than two people on board doing the work and providing a lot of chat and drama for the audience at home.  On the Maverick, there was only Don and his mate, Joe.  Joe is a relatively famous surfer from California and later Hawaii who has a long term relationship with Jack O’Neill of wetsuit and surfboard fame, and his sons.  Joe used an O’Neill 7 mm wetsuit that he picked up from them to test.  Don used a Bare 6 mm wetsuit, booties and mittens and his own jerry-rigged warm water suit over the top.  Water temperatures in July range from 45-48 degrees F.  Air temps were from 45 to 60 degrees.  He also used an OTS Guardian full face mask and regulator system.

The work day usually started at around 5:30 am when Don would grab a quick bite and then check the boat.  They tried to be underway by 6:30.  At a cruising speed of 4-5 knots it took up to 2 hours to reach the sites they dredged within the owner’s claim.  Each diver spent 4-6 hours per day submerged to depths of up to around 30 feet, but generally shallower.  Decompression sickness was not a major concern.  Getting tired was.  Wrestling with the heavy dredge, the other gear and the sea takes its toll on young men much less those in their 50s and 60s.

Here is the clean-up from that week’s efforts:

I hope you enjoyed this story.  If you have some ideas or questions, I’d love to see them.  Please write them in the comments section.  If there is no comments section directly below, click here:  >>comments<<