This is the eighty-first in a series of reviews of the best dive resort locations around the world.  In this post, the focus is Saipan. In addition to this series on dive resort locations, the best worldwide liveaboard diving locations and services are reviewed in their own series.  To check them out, or others in this series, click on Liveaboards/Resorts on the menu at the top and choose a title from the list.

Have you ever been diving in Saipan before?  If so, I’d love to know about your experience.  What dive shop or liveaboard did you use?  Which dive spots are the best and what are the conditions there regarding the visibility, current, water temperature, sealife attractions, etc.?  Please post your response in the comments section at the bottom and we’ll all learn something we can use.

Background – Saipan is the largest island of the Northern Mariana Islands and is a commonwealth of the U.S.  With a population of 52,000, it is 23 kilometers (14 miles) long and 8 kilometers (5 miles) wide and located 190 kilometers (120 miles) north of Guam.  The west side of the island has sandy beaches with the east side characterized by rocky cliffs.  The highest point is Mount Tapochao at 480 meters (1,560 feet), which is a limestone mountain.  The forests have coconuts, Thai style hot peppers and papayas growing wild with farmers cultivating bananas, mangos, taro, and breadfruit.  The Spanish first set foot on Saipan in 1522.  Disease wreaked havoc on the local people over the years and they were all removed to Guam in 1720.  The Spanish were followed by German colonizers then Japanese in WWII and the Americans after the defeat of the Japanese.  Tourism has long been an economic driver.  Then in the 1980s garment production became important.  Minimizing the details, there were many international and local shenanigans and imported foreign workers.  After the GATT agreement expired eliminating quotas to the U.S. for garments, all the factories closed by 2009.  Recently casino gambling has become more important.  Today 50% of the residents are Asians from a variety of countries and 35% are Chamorro, Carolinian or another Micronesian ethnicity.  The local people can practically all speak English, but probably speak their own languages at home.  Most are Catholic.

Undersea World – Saipan has a long extinct volcanic foundation that is covered by coral based fossils of limestone.  Today it has a fairly rich healthy fringing reef with caves, rocky outcrops, and ledges.  There is a large lagoon that has a trail of World War II wrecks on a sandy bottom with intermittent coral heads and also several smaller lagoons and bays.  In addition, offshore are several coral shoals rising from the deep.  The reefs have a lot of hard corals, encrusting sponges, and sea fans, but not a lot of soft coral cover.  Marine highlights include sandy sections with garden eels and coral areas with octopus, nudibranchs, moray eels, butterflyfish, five line snappers, pufferfish, and schools of tangs, parrotfish, and anemones with their partner clownfish.  Green and hawksbill turtles, blue-spotted and a larger species of stingray, Napoleon wrasse, schools of barracuda and jacks, and huge schools of other smaller pelagics are frequently sighted with whitetip reef sharks and large squadrons of eagle rays quite common.

Seasons and Conditions – Air and water temperatures are in a fairly narrow warm range year round.  Average daily high air temperatures are from 28-31°C (82-88°F).   Water temperatures run from 27-29°C (81-84°F) requiring minimal thermal insulation.  Perhaps a 3mm full or shorty is the most you would need.  Rain is significantly greater between July and October with the chance of a typhoon or tropical storm greatest from August through November.  It is possible to lose a few days of diving and have some difficulty flying in and out during a storm.  Visibility is typically excellent at 20-50 meters (68-168 feet).  Many sites only have mild current at the most with a few occasionally having a strong current.  Waves and surface chop is not very significant except during storms.  There are many dive sites suitable for beginners and others for more advanced levels.  At least 20 dive operations are set to provide a full range of diving coursework, equipment rental, guiding and boat cruises.

There is not a liveaboard that directly cruises the Saipan dive sites, but there are boats that go to Palau and Chuuk (Truk).  Here are my reviews and links to those liveaboards: 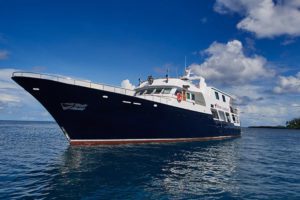 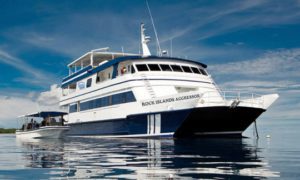 Here are my reviews of other Pacific island liveaboards and resort diving:

With the interesting undersea terrain, caverns, wrecks, lots of turtles, a variety of fish, moray eels, reef sharks, eagle rays and barracuda, scenic beach and mountain vistas, and historical and cultural site shots as well, there are many excellent photo opportunities.  For information and reviews of dive cameras, click here:

Saipan International Airport has direct flights from Seoul, Busan, Hong Kong, Beijing, Chengdu, Guangzhou, Shanghai, Hangzhou, and Manila.  Seasonally there are also flights from Tinian, Guam, and Rota.  There is no public transport system, but there are shuttles, often free, from hotels to the duty-free shopping area in Garapan.  Taxis are plentiful but expensive and are only allowed to pick up at hotels, the airport, and the duty-free shopping area.  Illegal taxis operated by Chinese nationals exist that will take you anywhere for a healthy fee.  Rental cars and mopeds are also available to rent.  Night use of bicycles and mopeds is not advised as car drivers are not reputed to watch out for their safety very well.

There are around 56 resorts, hotels, and lodges ranging from $20-$459 per night.  A few have an in-house dive center or are associated with one.  In all there are at least 20 dive shops offering services including equipment rental, dive courses, guiding and boat dive cruises.  The website linked below is a good source for the available options and can arrange a booking.  You can easily find the locations on the map provided on this site.  Their rates are the lowest and it is free to cancel or change dates.

Things to Do on Saipan (aside from scuba diving)

I hope you found this post on Saipan scuba diving interesting and useful. If you have any questions or ideas, please feel free to share them in the comments section.  I’d love to know of any experience you have diving in Saipan.  If there is no comments section directly below, click here:  >>comments<<