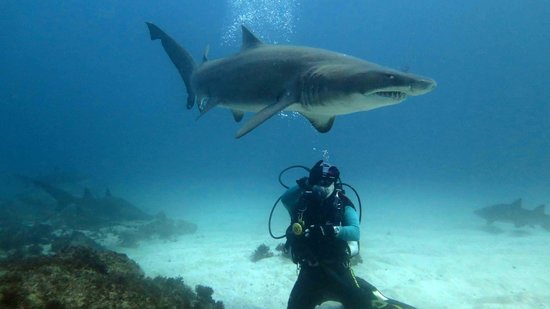 This is the one hundred and seventy-third in a series of reviews of the best diving destinations around the world.  In this post, the focus is on Africa.  For other “Best” reviews of liveaboards and destinations, go to “Best Liveaboards & Destinations Lists” on the top menu.

Have you been diving in Africa before?  If so, I’d love to know about your experience.  What dive shop or liveaboard did you use?  Which dive spots are the best and what are the conditions there regarding the visibility, current, water temperature, marine life attractions, etc.?  Please post your response in the comments section at the bottom and we’ll all learn something we can use.

When you imagine the wildest, most exotic, natural environment possible, chances are Africa comes to mind.  What is the diving like there?  Some of the locations are pretty remote.  Is it worth the time to travel to such distant locations?  I say the answer is yes.  Below is an introduction to 10 of the best destinations representing a variety of conditions.  (Please note, the Mediterranean Sea, Red Sea, and Middle East are not included in this review.)

Most of the best diving in Madagascar is in the Nosy Be area near the northwest tip on the Mozambique Channel.  Whether you dive from a local shop or on a liveaboard, the main focus is on the five-island Mitsio Archipelago to the north or the four-island Radames Archipelago to the south.  The marine life is diverse with 300 species of coral and 1,300 fish species in clear water on a range of basalt subsea formations with lots of plate corals, humongous sea fans, and macro critters.  The megafauna is also memorable with numerous species of sharks and rays, pelagics, sea turtles, dolphins, whales, and whale sharks.  Currents can be strong on some sites making for exhilarating drift diving.

For a more detailed review of Madagascar liveaboards and scuba diving, check out this post:

Port Elizabeth is located 478 miles (770 kilometers) east of Cape Town and occupies 10 miles (16 kilometers) of coastline along Algoa Bay.  Cold water from the west mixes with warm water flowing along the east coast creating the right conditions for a cold water reef that has a lot of hard corals one might expect on a more tropical reef, to go with cold water sponges, soft corals, and gorgonians.  The underwater topography is diverse with sandy stretches, gullies, pinnacles, rocky formations, and steep drop-offs providing excellent habitat for a range of invertebrates, macro critters, reef fish, game fish, rays, small sharks, ragged-tooth sharks, whales, dolphins, whales, fur seals, and penguins.  Sites are available right offshore, outside the bay, and around small nearby islands.  There are also several wrecks at recreational diving depths.

For a more detailed review of Port Elizabeth scuba diving, check out this post:

Dakar is located on Cap Vert, the westernmost point of continental Africa.  In its position there the reefs have a mix of Northern Atlantic, Mediterranean, and tropical marine life on volcanic and rocky outcrops interspersed with sandy patches with interesting swim-throughs and caverns.  While not as rich in corals as many tropical areas of the world, there are abundant gorgonians, and soft and hard corals to go along with many macro critters, reef fish, pelagics, turtles, rays, sharks and cetaceans.  Seasonal attractions are huge stingrays from December to April, nurse sharks from July to November, green turtles from January to April, and humpback whales in September and October.  In addition, there are many historic wrecks and others sunk to discourage trawlers from dragging nets across the reefs, all to the delight of divers.

For a more detailed review of Dakar scuba diving, check out this post:

With twice the area of California, a 1,535-mile (2,470-kilometer) coastline, and numerous offshore islands and reefs, Mozambique offers a great list of megafauna on its many pristine dive sites across the length of the shoreline.  Interesting subsea terrain of fringing reefs, rocks, walls, pinnacles, and arches are richly encrusted with a great diversity of hard and soft corals, gorgonians, and sponges.  There is an array of macro critters, reef tropicals, and pelagics to go with seasonal mantas, whale sharks, and humpback whales, and an astounding list of other sharks, rays, pelagics, dolphins, and even dugongs.

For a more detailed review of Mozambique scuba diving, check out this post:

Aliwal Shoal is a fossilized sand dune 3.1 miles (5 kilometers) offshore from Umkomass in the KwaZulu-Natal Province of South Africa.  This Marine Protected Area (MPA) benefits from warm currents running along the coastline from the north that bring plankton and nutrients enriching the bountiful reef of hard and soft corals, and sponges.  The subsea terrain consists of rocky areas, overhangs, and caverns that make a good habitat for a rich variety of macro critters, reef tropicals, and megafauna.  A fantastic array of turtles, rays, pelagics, cetaceans, and many species of shark are the highlights.  Ragged-tooth sharks migrate for breeding from June to November, whale sharks in summer, and a baiting program brings in many shark species with masses of oceanic blacktips and individual tiger sharks common.  The pilchard run can be breathtaking, as well, and there are also wrecks to explore at recreational depths.  Passage through the surf to get to the shoal makes for an exciting boat trip and currents can be strong at times.

For a more detailed review of Aliwal Shoal scuba diving, check out this post:

Situated below the equator 300 miles (480 kilometers) to the east of mainland Africa, the 115 islands of Seychelles have an inviting warm climate and great diving year-round.  The granite-based undersea topography is not as rich in corals as Caribbean or Southeast Asian sites, but it is pristine and supports diverse marine life rich in macro critters, reef tropicals, and the main larger attractions like turtles, a variety of sharks including bull, silvertip, hammerhead, and whale sharks, stingrays, eagle and manta rays, and pelagics like marlin and swordfish.

For a more detailed review of Seychelles liveaboards and scuba diving, check out this post:

Spread over a broad area, Cape Verde (Republic of Cabo Verde) is an archipelago of 10 main islands 350 miles (570 kilometers) off the coast of Senegal, West Africa.  Warm tropical waters combined with cooler Atlantic currents on a volcanic subsea terrain of sandy bottoms, rocky formations, caverns, walls, and crevices provide habitat for a wide range of marine life.  There are colorful invertebrates in the form of encrusting corals and sponges and a variety of macro critters including many crustaceans and nudibranchs along with scorpionfish, frogfish, morays and a variety of reef fish.  Currents in some areas bring nutrients that encourage a variety of turtles, sharks, mantas, gamefish like tuna and wahoo, dolphins, and whales to spend time around the islands.  In addition, there are remains of 70 historic wrecks and a number of divable more recent ones.

For a more detailed review of Cape Verde scuba diving, check out this post:

Set 62 miles (100 kilometers) west of Morocco, the 7 main islands and numerous islets of the Canary Islands have a volcanic subsea terrain influenced by the warm Gulf Stream, Canary currents, and cold ocean currents with lots of nutrients coming from more tropical areas.  The corals aren’t rich but the topography of ledges, lava flows, caverns, and boulders supports 550 fish species and 1,000 invertebrates.  There are 3 Marine Protected Areas (MPAs) to help nurture and maintain the pretty rich macro life and reef tropicals with many large attractions that include a variety of rays, sharks, turtles, pelagics, and cetaceans.  Most of the mammals and pelagics are there year-round with mantas more common in September.  In addition, there are dozens of wrecks from many eras and an underwater gallery of sculpture called Museo Atlantico with 35 works of art creating a surreal reef scene.

For a more detailed review of Canary Islands scuba diving, check out this post:

Sodwana Bay is located just down the coastline from the excellent diving in Mozambique in the far northeast corner of South Africa’s KwaZulu-Natal Province.  The dive sites are set on the sandstone continental shelf with 1,200 species of fish and 100 species of coral that is mostly in pristine condition.  Surfers are delighted with the breaks and there is generally north to south drift for divers.  Macro life and reef tropicals are diverse and the megafauna of pelagics, stingrays, mantas, sharks, dolphins, and whales is truly impressive.  Mantas, ragged-tooth sharks, and leatherback and loggerhead turtles all migrate to the area from December through February with humpback whales coming from June through October.  Of note for the technical community, Sodwana Bay’s Jesser Canyon is the site where divers approached coelacanths at 330 feet (100 meters).

For a more detailed review of Sodwana Bay scuba diving, check out this post:

False Bay is a protected area on the south side of Cape Town.  The west side of the bay is generally  rocky with more steep drop-offs when compared to the east side of predominantly sandy bottoms.  Current is not much of a factor but surface chop gets more intense during the summer months when the southeasterly winds kick up.  There is an extensive cool water reef of mostly soft corals, sponges, sea fans, other invertebrates, and kelp, with diverse macro life, reef fish, and a large number of small sharks like shy sharks and catsharks, along with the much larger seven-gill shark, and great white sharks which come to feed on the up to 60,000 Cape Fur seals that take refuge on Seal Island in mid-bay.  Many dive shops operate shark cage dives there to allow a close look.  There is also a large colony of African penguins (jack-ass penguins) near Simon’s Town and several wrecks mostly at depths suitable for advanced and technical divers.

For a more detailed review of Cape Town scuba diving, check out this post:

For my reviews of some other African and Southwest Indian Ocean scuba diving areas, please check these posts:

With the colorful coral reefs, a variety of fish, marine life, sharks, turtles, shipwrecks, and beautiful and historic onshore targets, as well, there are many excellent photo opportunities.  For information and reviews of dive cameras, click here:

I hope you found this post on the best scuba diving in Africa interesting and useful.  If you have any questions or ideas, please feel free to share them in the comments section.  I’d love to know of any experience you have.  If there is no comments section directly below, click here:  >>comments<<